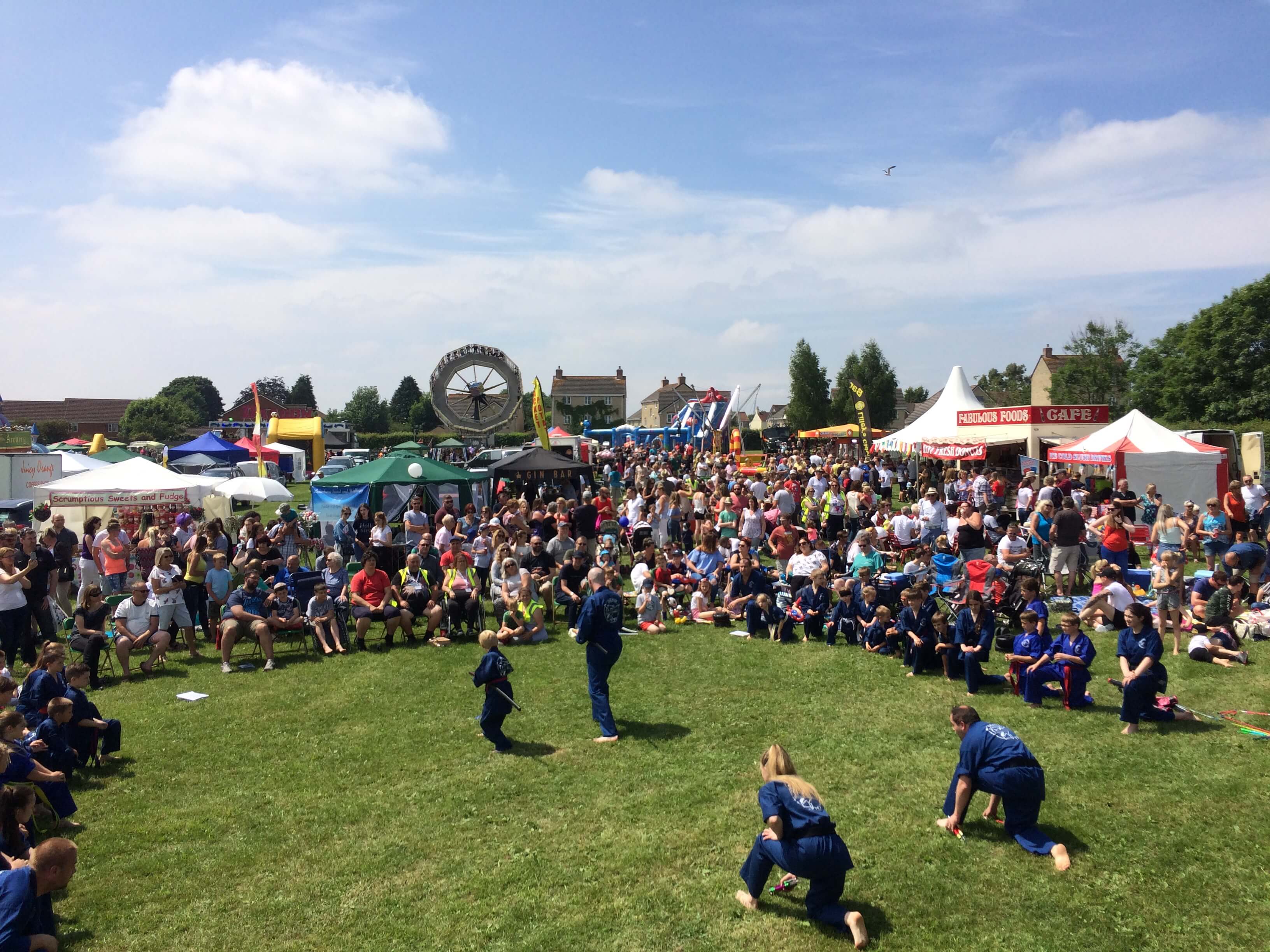 Almost 3,000 people turn out for Peasedown’s 10th Annual Party in the Park Festival

The event, which included a special flag-raising ceremony with festival organisers and Cllr Sarah Bevan and the cutting of a 10th Birthday Cake, featured a huge array of stalls and attractions, such as the village’s second Official Push Kart Race, the return of the Peasedown Diamond cider, Peasedown’s first Dog Show, and the results of the Party in the Park Grant Giveaway.

The Sara Holley Community Award, set up in 2011 in memory of a life-long resident who passed away, was won by a woman who has spent almost half-a-century serving the local community through her local church and the school. Linda Day has been a part of Peasedown St John Methodist Church since the early 1970’s. She has been involved with countless events, activities, outreach projects, and was
heavily involved in raising the funding needed to build the church’s extension over 15 years
ago. The leadership role she has taken on at the church has helped support the regular lunch clubs, breakfast get-togethers, drug support groups, Foodbank collections and pre-school groups for local children.

Party in the Park Chairman, Nathan Hartley said: “Supporting and caring for children sums up a lot about what Linda has been about. For 20 years she has chaired the Board of Governors at Peasedown St John Primary School, and during her tenure she has appointed not one, but two headteachers! Her vision and drive for the school helped take it out of special measures to now become one of the most popular in the district. Her nomination this year was heavily endorsed by the decades of service she has put into the church and the school. We also can’t fail to highlight that Linda’s role as a secondary school teacher at Writhlington School has meant that ‘at least’ 1,000 of us have been taught by Linda! That’s 1,000 of us of that have been inspired and encouraged by this special person. Congratulations, Linda – a well deserved winner!”

Over £3,000 was raised on the day, which contributes to the total £7,000 cost of hosting the one-day event. All of the money will be reinvested back into Peasedown St John either through future events or the Party in the Park Grant Fund. Festival revellers were kept entertained all afternoon thanks to back-to-back outstanding performances from DJ Pete Bailey, Bath Spa Band, Call the Shots, Pub Rock UK, Jamie Woodland’s Black Belt Academy, Boogie Bounce, Up Your Brass, Susan Hill School of Dance and Bath All Starz.

To add extra excitement to the proceedings, this year’s Special Guest Hosts were Pete and Seb from Somer Valley FM, with the radio station broadcasting live throughout the afternoon. A massive £2,500 was given away this year to organisations that are either based in, or work in, Peasedown St John. Peasedown St John Methodist Church, Wansdyke Play Association, Peasedown Wellbeing Group, Peasedown St John Primary School, Peasedown Albion FC and Peasedown Youth Centre were all presented with grants.

Peasedown St John’s 10th Party in the Park festival was held on Saturday 9th June on Beacon Field, from 12noon – 7pm. Thanks to the support of the Somer Valley Foodbank volunteers, Air Cadets and Party in the Park volunteers, over 60 hours of time were given to staff the festival gates, and ensure the event ran according to plan, and to schedule.